It’s a tough job, activating sponsorship of what is a secondary property. Let’s be honest, most brands sponsor FIFA because of the men’s World Cup. As a global sponsor, you get all the other tournaments too – women’s, beach soccer, under 20s, confederations etc. Yet it’s rare that the global sponsors will activate these. It’s as if they’ve spent all their money on becoming a FIFA sponsor but they have nothing left to activate the other tournaments. 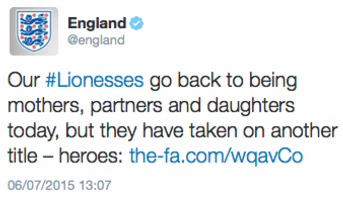 The FA got dragged into the debate following the team’s exit with their tweet about the female football players coming back to be mothers, partners, daughters and heroes. We know what they were trying to do but they didn’t do it in the right way.

So what works? Sport England’s #thisgirlcan won a Gold Lion at Cannes this year and Proctor & Gamble’s #likeagirl campaign for Always won a Grand Prix award in the PR category. So marketing to women and activating a women’s sport can be done effectively. Yet still…. Hardly anyone does it. In researching this piece, I tried to find examples of great campaigns from the 2015 women’s World Cup. But they were few and far between. Instead, here are some I found interesting.

Yet again, Nike trumps official sponsor Adidas (who seem to have done nothing apart from provide the ball and kit) thanks to their sponsorship of the US team. The film manages to portray female footballers in a way that doesn’t patronise them or the audience – it shows their grit and determination to be the best at what they do.

I really liked the Norwegian’s team spoof video of women’s football (see top of page). I both love and hate the fact they’ve had to resort to including the stereotypes of women’s football: the goalkeepers are too small, the players are slow and they’re all lesbians. But it made me laugh and it addresses the challenges they probably face on a daily basis.

Although no longer a FIFA sponsor, Continental is an official sponsor of the England Women’s national football team and the company also sponsors the FA Women’s Super League. As well as creating a series of videos following a number of England team players on their #roadtoCanada they also have a website called ‘the offside rule’ which offers some good content including a podcast, great contributors and an opportunity for it to live beyond 2015. However if I were them, I would get rid of the ‘we get it!’ part of the title – there’s no need to express surprise at women’s ability to understand the offside rule.

US Soccer Federation / The FA

Both federations have launched similar campaigns. The US Soccer Federation launched a campaign called #SheBelieves at the end of May and the FA’s #wecanplay went live at the start of June.

Both focus on female empowerment. However the US Federation has already created content with their players to bring the theme to life. They also have broadcasters, brands and sports teams supporting and promoting their message. The FA has a lot of football clubs on board but it will be interesting to see how they continue to amplify this now the tournament is over. And let’s be honest, the success of the England team did more for the reputation of women’s football than any amount of creative thinking, research or money could ever do.