More than a year had passed since the Nissan Note had been revealed to the world’s media, so our campaign had to create impact for a product that could offer little in the way of new ‘news’. Our objectives were to increase the car’s share of voice across European media and engage a non-automotive audience with Nissan’s story of exciting innovation.

We started with a universal truth – everyone hates washing their car. Solving this everyday problem by creating the world’s first ‘self-cleaning’ car would establish a surprising story of innovation with the Nissan Note at the heart. As pioneers of self-healing paint technology in 2005, we identified an opportunity to position Nissan as innovators in the field. innovative water-repellent paint technology to the Nissan Note, we produced the world’s first self-cleaning car. We created a film of the car being tested on dirty roads, demonstrating the paint’s resistance to mud and dirt. We used this to support a sell-in to European media, which involved coordinating internal stakeholders, managing the translation of the video into five languages and creating B-roll content for broadcast media.

For just £21,000, our campaign delivered the most viewed piece of Nissan viral content on Youtube ever, with nearly 5 million organic video views in 2 weeks and over 40,000 shares on social media. It contributed to a 33% month on month increase in Nissan’s share of voice and garnered global interest from internal executives.

The story secured over 600 pieces of coverage and 18 broadcast features across 32 countries, including pieces in Wired, Mashable, The Sun, Mail Online and Die Welt, among others, bringing the Nissan Note to new audiences across the globe. 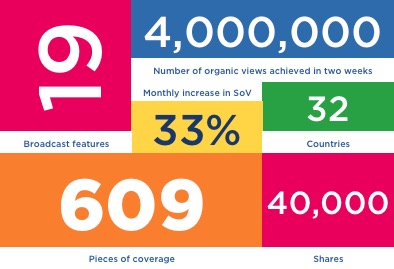